Bloomberg has an awesome breakdown of YouTube’s really cool announcement today. They’re launching their own “skinny bundle” of network and cable traditional TV access which will fuse with a high-tech cloud DVR and their own recommendations for YouTube videos.

A conversation will commence online about the viability of these low-priced “skinny bundles” and I tend to think they’re not a great model and won’t last. I don’t think Google thinks they’ll last either — I think their intention is to blur the lines between content on YT and TV. Because that’s the battle they’ve been fighting for years… Google is dominating digital ad spend but barely chipping away at television ad spend.

If they can change media buyer perceptions — prove that their content is just as premium as TV — then maybe they can get some of that dough. I don’t think it’s nearly that easy. Literally, this is the example, cited in the Bloomberg piece:

A query for cooking shows, for example, might turn up recommendations for Hell’s Kitchen, the TV staple from Fox, alongside Epic Meal Time, a web-only show produced by Studio71 GmbH.

Now THERE’S a stretch: Competition reality fans seamlessly transitioning into a handheld brofest about binge-eating. Is surfacing vloggers next to This Is Us going to accelerate cord cutting? Or shift ad spend from TV to digital? There’s no way.

This is a really cool service and it’s extremely thoughtfully designed. I’m thrilled to use it. But the idea that just putting these two types of content next to each other will somehow “merge” them in the eyes of audiences and advertisers is flawed. Until YouTube makes content like Empire, it’s not going to command revenue or ratings like Empire.

Jason Hirshhorn piqued my interest quickly (maybe accidentally?) in the mix of his rantnrave on Redef today [bolding from me]:

All advertising is content, some more enjoyable than others. Sometimes the less enjoyable ads sell product better, using less of a viewer’s time.

That’s a great trade off for a viewer! The advertiser gets to sell HARD in exchange for not much of your time. I’d take that any day.

And yet, most advertising “quality scores” (a fundamental component of bidding algorithms aka getting a low CPM) would penalize an ad for local-car-dealership-style of hammering jingles, prices, locations and calls to action. And skippable ads obviously disincentivize consumers from watching brisk but sales-ey ads… they get annoyed and hit skip. It’s all in the name of “the user.”

I’m afraid that the ad networks, ad tech and technologists are favoring more insidious, “engaging” branded-content type ad creative because it supposedly puts the user first. We know that branded content is sometimes just manipulative… hiding the fact that it’s advertising in favor of engagement. So we need to be open to unskippable, “less enjoyable” ads and heavy calls to action — because sometimes they can be annoying, but they use less of our attention… and attention is way more valuable to the user and the platform.

Sadly, it’s time to part ways with Defy! I’m making a slight career realignment to find a big next move that embraces everything I love about creative storytelling and digital strategy.

I wish the best to Defy Media and Clevver as they continue to challenge traditional entertainment. It’s a thrilling battle! I’m going to miss the team a ton. I’ll never forget the energy in those cluttered halls — it springs from every individual’s culture, attitude and passion. It’s completely infectious and it’s changed how I look at creativity.

Over the coming weeks, I plan to put a lot more time into my class at LMU, a cool new side project, a new launch for Deck Around and even the blog you’re reading right now. Most of all, I’m thrilled for what’s next and ready for the adventure ahead. Onward!

I love to use conversion funnels to help structure and organize my consulting presentations. I find that funnels can help describe everything from marketing plans and social content strategies to casting actors and hiring talent.

I almost always keep my presentations simple by doing them in Google Slides and I’ve built a really basic funnel template that I use over and over again in the program. I thought it would be worth sharing because the first time I needed one of these, it was in a time crunch and I couldn’t find a simple enough template. Here it is for you to swipe and use in your own presentations! You can customize the colors and text to your subject. 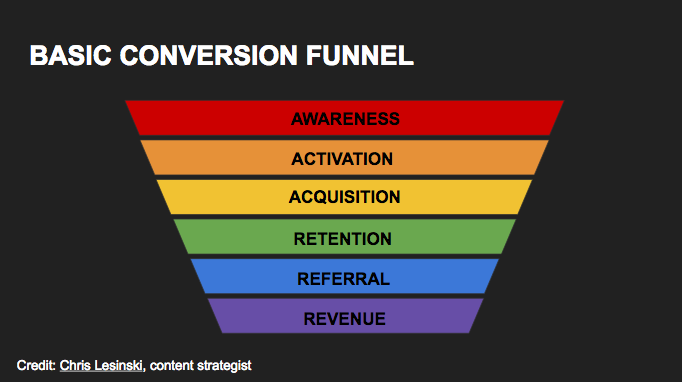 Here are the instructions which are also included in the link: